Fill out your information below to get your FREE Brain Optimization Guide!

CAN A LOW THYROID IMPACT MY BRAIN in Meridian ID?

Do you suspect or know you have low thyroid in Meridian ID? Living with a low functioning thyroid can be a very difficult thing to deal with. Not only may you feel completely wiped out all the time, but you also might be noticing that it’s starting to affect your brain with symptoms such as brain fog, fatigue, depression, and even problems finding words.

If you don’t have to imagine these scenarios, because it is your daily life then you may have a low thyroid.

If you said yes to any of these, especially more than one. It is likely you may be suffering from a low thyroid, which is called hypothyroidism.

What Is Hypothyroidism in Meridian ID?

Hypothyroidism is when your thyroid isn’t producing enough thyroid hormones into the bloodstream. The thyroid gland’s main function is to control the rate at which each cell in the body functions by releasing two hormones: T4 and T3. The pituitary gland, which is part of your brain releases TSH which tells the thyroid gland to produce the hormones. T3 is the main hormone our body uses while T4 has to be converted to T3 within our gut and liver. 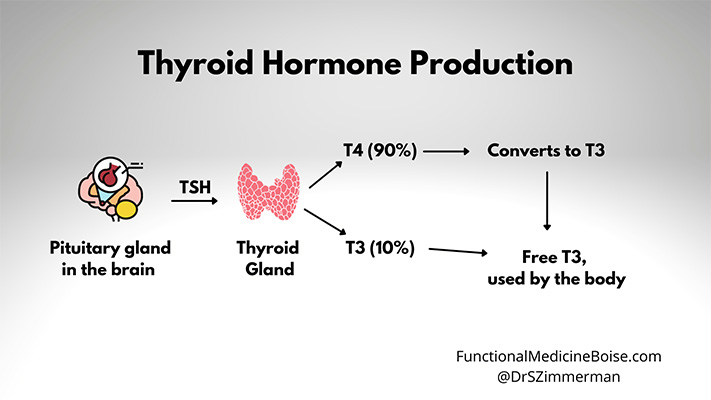 Because the thyroid hormones influence the rate at which every cell in the body functions it can cause symptoms with nearly every organ from your gut, liver, skin, and brain. 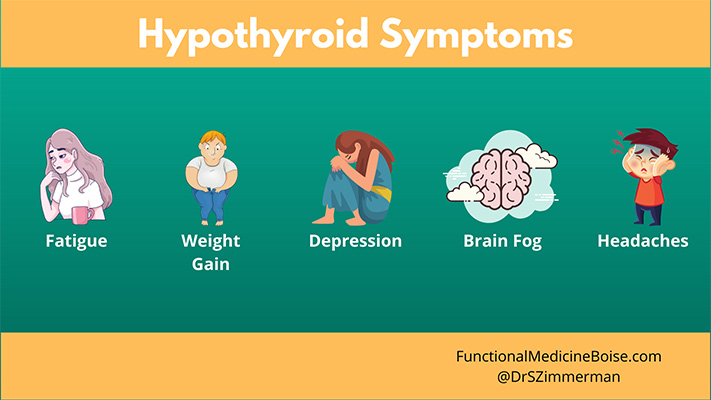 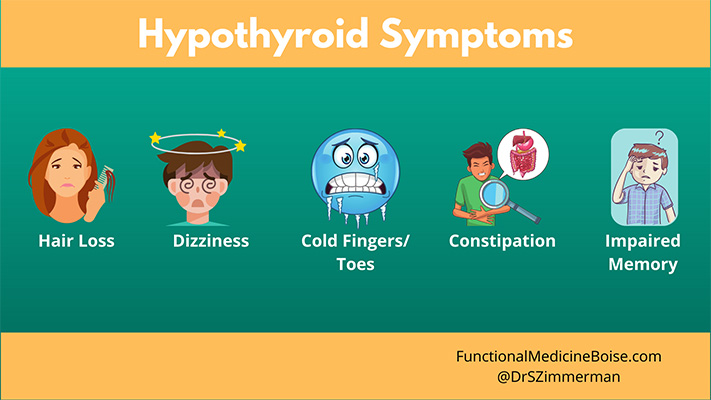 As you can tell, there are a lot of symptoms that one can have when their thyroid isn’t functioning properly. We are going to focus on the brain based symptoms.

Have you gone to your computer to complete a task only to find yourself staring blankly at the computer screen, unsure where to start as it seems you all of a sudden forgot why you went there to begin with?

Maybe you’ve had the experience of trying to do simple math, and you’re surprised at how your brain seems to trip over basic addition that you could previously rattle off in your sleep?

These are examples of brain fog, which is a common symptom of a low functioning thyroid.

Hypothyroidism can greatly affect the function of the brain by causing memory loss, mental fatigue, dizziness and headaches.

As if those symptoms aren’t bad enough, you have likely felt you are merely existing and noticing less motivation instead of the previous enjoyment you received on a daily basis.

Depression is just another symptom to the many that occur with hypothyroidism.

A Deeper Look Into Thyroid Function

So let’s say you relate to all or most of the examples given, but when you had your thyroid tested by your doctor, your tests came back normal and are told nothing is wrong. You start to doubt yourself and wonder if maybe you really are just depressed and that is causing everything else.

But you know something isn’t right and you’re tired of feeling fatigued all the time and the mental fog is starting to seriously affect your job and relationships – you just want answers and relief.

Here’s the thing, just because your tests came back normal, that doesn’t mean that you’re not experiencing the impacts of a low functioning thyroid. Unfortunately, there’s a deficiency in current testing where thyroid function isn’t looked at in a more detailed or deeper way.

For example, in school medical providers are taught to perform two main markers: TSH and T4. TSH is what tells the thyroid to produce T4. If TSH is elevated with T4 going low then you’d be diagnosed with hypothyroidism, but if that didn’t occur you’d be told nothing is wrong. T4 isn’t even the form the body uses the most, it is actually T3 which isn’t routinely evaluated..

The problem is that there are more values that can be obtained which provides much more insight, especially those which show an autoimmune response. Autoimmunity is when your body is attacking itself and it is responsible for 50-90% of all low thyroid cases. 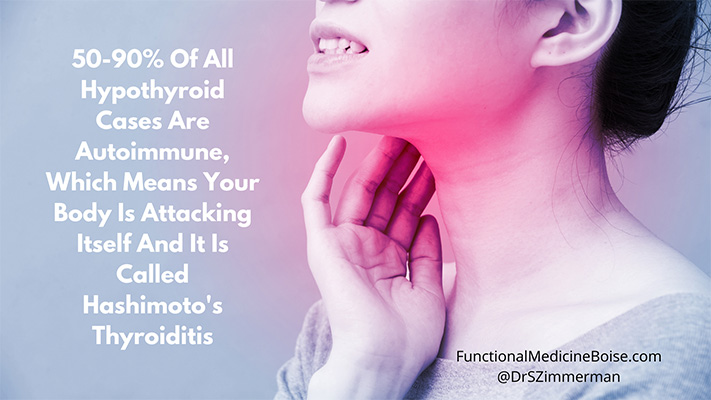 With autoimmunity the type of thyroid you take can actually be making you feel worse and it isn’t as simple as getting your labs to be considered normal.

As you can see only running 2 lab markers can lead you astray. And here’s another thing, it’s possible that you’re experiencing symptoms of a low functioning thyroid not because of the thyroid itself, but because of an imbalance in the brain.

Remember, the brain is what tells the thyroid to produce hormones. If the brain is unhealthy and not able to properly communicate to the thyroid, then the thyroid will not produce the hormones appropriately. By taking a deeper look at the function of the brain and the pathways of communication, we can determine if your brain is affecting the release of thyroid hormones.

Imagine only having your thyroid labs evaluated without your brain being looked at, it will provide an incomplete picture. It should come as no surprise that a comprehensive evaluationshould be performed to best help you to identify what is causing your symptoms.

For these reasons nearly 30-50% of our patients who come in for thyroid concerns actually have no thyroid issues at all. For almost 25%, the thyroid is the main culprit of their symptoms.

How To Improve Thyroid Health

Luckily, there are things you can do to help improve thyroid health. Let’s take a look: 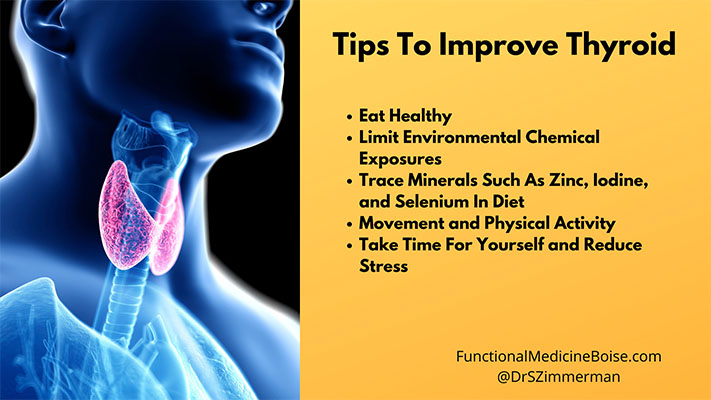 How Our Brain, Mind, & Body Method Can Provide You With The Answers You Seek

If you’re still reading, it is because you are looking for help and want answers.

So how does our BMB method help you to get to the bottom of your symptoms and be able to live life again?

We start by evaluating you as a whole person as we understand how a dysfunction in one area can impact another. For this reason we start with a comprehensive evaluation with allows us to identify what is preventing you from living the life you want by:

If this sounds like the approach you are looking for, then request your free health strategy session today and we will work with you to finder the answers you need.